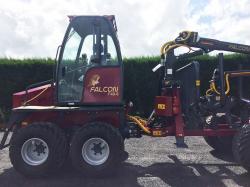 We will be showcasing the Falcon F40-8. Should be a good show!

The Falcon forwarder has now been accepted for grant aid by the Scottish Forestry Commission. This is an exciting development for small to medium plantation owners and contractors in Scotland. Two models are available to Scottish forestry owners they are the F40 and F40-8.

We also confirm that the series of equipment meets the following European Standards;-

Falcon will have a stand at the upcoming "Irish Forestry, Woodland and Bio Energy Show" in Stradbally Hall Estate on the 9th and 10th of May.

Don't miss this great opportunity to check out the Falcon F40. 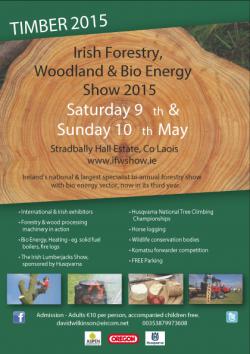 The Overall Winner of the Innovation Arena Award was The Falcon Forwarder, the only Irish build forestry forwarder, 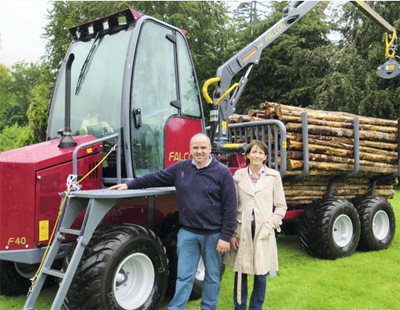 Meath engineering firm Falcon Forestry, a division of Hand Engineering from Oldcastle, has launched the first ever Irish-designed and manufactured compact forestry forwarder this week. The machine is designed to bring a four-tonne load across difficult ground conditions for forestry thinning operations.

The new Falcon Forwarder has a narrow 2.3m track with 500mm ground clearance and has been designed for Irish conditions in association with a number of timber growers.

The machine is powered by a 40hp Kohler engine with two-speed hydraulic drive to six of the eight wheels.

The midlands-based Forestry Cluster Group bought the first launch machine, which was funded with Leader support. At the launch were Darragh and Marcia Hand, with the new Falcon Forwarder launched by Euro MEP Mairead McGuinness at Reyenella House, Turin, Delvin, Co Westmeath, this week.

We will have a full report on the machine in next week’s Irish Farmers Journal.

At last an Irish kit that targets private woodland.

At last we have a machine that is designed specifically for farm forests and mixed species woodland. It has been a long time coming but finally, after two decades of the current afforestation scheme, we now have a forwarder available that is specifically designed for Irish woods and Irish conditions.

Its arrival is timely as many farmers are about to commence first thinning. With an average plantation size of eight hectares, it is difficult to justify using the huge and costly machines that were formerly the only ones available.

The transport costs alone are prohibitive when moving such equipment and contractors are naturally reluctant to haul in to an area where they may have only one or two day's work.

In the past, woodland management and design in Ireland was based on the machinery that was available. We should of course have been doing it the other way around, managing our woods to achieve maximum growth rates and harvesting them economically by using appropriate equipment.

Darragh Hand of Falcon engineering in Dromone, Oldcastle, Co Westmeath, has a fine track record of producing machinery that farmers actually need. This latest product appears ideal for the task without the many drawbacks associated with traditional large equipment.

Web Design By Flo Web Design The F40 project has had assistance from Meath Partnership and Leader funding.